1. Remove glass (be careful!) and lock bar. Tip playfield all the way up.

2. Tape thin end of the large zip tie to the red female plug attached to the connection harness (example shown)

3. Slide thick end of zip tie up through the hole in the playfield where the rest of the ship wires go. My wire harness has a black cover on it now (you should do that too) but you should be able to figure out where your's is by the items in this picture. It's pretty much directly under the ship.

7. Remove the two nuts that hold the top railing on the ship and remove the railing

8. Thread all of the wire from the left side of the playfield, under the ship, to the right side. You can either now remove the zip tie from the wire harness or use the zip tie in this step. You are just fishing the wires up through the hole in the BP deck where the standup targets are.

10. Carefully lower the window filler mod over the two black hex spacers (which the nuts were attached to). While you do this pull some of the wire back down through the ship deck so there is no slack above the deck. The hex spacers may be loose (snug them down hand tight) and you should check the two screws holding the spinner brackets to the ship deck, tighten if loose. Use your fingers to pull the standup target supports forward just a bit so the window piece slides behind.

11. While sliding the window filler mod down make sure it goes over the existing wires behind the stand up targets and gently pull the wires from the filler mod down so there isn't a lot of slack above the ship deck. There should be a loop of wire sitting to the right of the ship deck (above the main playfield) that you just pulled back through. Put the top railing back on the ship and secure with the two nuts you removed originally.

13. Unplug the ship spotlight connector (2 pin molex, yellow & yellow/green wires on one side and blue & black wires on the other) and plug the harness inline, reconnect the spotlight. Use the smaller zip ties to secure the harness along with the rest of the wires.

14. Lower the playfield, Bask in your flickering goodness.

Enhance your Jersey Jack Pinball - Pirates of the Caribbean game with this cool window that is added to your Black Pearl right between the stand-up targets. This detailed 3D printed model is hand painted to match the rest of the Black Pearl. A historically accurate design which showcases a translucent window which is lit with a flickering LED behind it to simulate a candle or gas lamp. Easy plug and play installation for lighting and only a few nuts to put in place. Added benefit of this mod is that it protects the optical sensors (optos) for the two spinners, one of which can get bashed by the ball which coming up through the VUK. Use this to prevent broken optos.

Wiring is plug and play. The hardest part will be fishing the wires down through the ship, which can easily be done with a sturdy piece of wire or long kebob stick, etc.

The color of the light in the video below is yellow/amber. A white light will still have a bit of an amber hue to it as that is how the window "glass" is painted but will be much more "blueish white" than the one below.

Check out the spinner decals which pair nicely with this mod: https://pinballmods.co/black-pearl-spinner-decal-set-jersey-jack-pirates-of-the-caribbean

It was in the prototype but didn't get produced in the final game. We all saw it, we all wanted it. .. 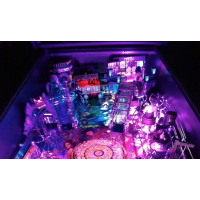 Here is a quick little plug and play lighting mod for your JJP POTC pirate chest. This is a tiny LED.. 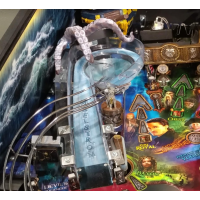 So there is a huge black box in the middle of your playfield, want that gone? Then you just need thi..